The hubs and I are trying our best to stick to our monthly budget.  The end of every month seems to bring the challenge of trying to find something healthy to make for dinner with what we have on hand…does anyone else have this issue?  I’m sure we aren’t the only ones facing this challenge.

I’m always up for the challenge but for someone who doesn’t like to cook I need inspiration.  I needed extra motivation last night since I was only cooking for myself.  The kiddo was at his father’s house and the hubs was at a company meeting.  It allowed me for a little more creativity since I didn’t have to meet too many taste requirements but it was still a task since I was limited to what we had.  I rely heavily on Pinterest for inspiration and haven’t had too many fails…yet!  I pull up Pinterest and search for recipes with the meat that we have on hand and make it as close as I can…which is what I did last night.  We had thin sliced pork chops defrosted for dinner.  I searched for healthy pork chop recipes and found a recipe for Spiced Apple Pork Chop recipe that looked amazing but was NOT healthy at all.  It called for almost a stick of butter, a lot of oil … not something I was willing to do.  Hello….summer is coming and I am not about to start cooking like that!!

I did a quick scan of what we had on hand and found we had a green apple that was all bruised and no one was willing to eat, most of the spices and an onion so I made my own inspired Spiced Apple Pork Chop recipe.

I sliced the apple thinly since I was hungry and didn’t want to wait too long for dinner to be done.  I cut the onion into small pieces and poured about a 1/4 cup of water into the heated pan, put a lid on it and let it steam for a couple of minutes.  I grabbed the cinnamon and cayenne pepper and added a little to the pan as the onions and apples were cooking. 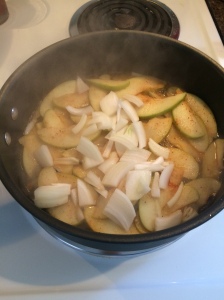 I then seasoned both sides of the pork chops with pepper and sea salt with some cayenne pepper.  I let the spices sit on the pork chops while the apples and onions steamed.  Once the onions and apples were done cooking I put them in a bowl and used the same pan.  I sprayed some avocado oil in the pan and placed the pork chops in. 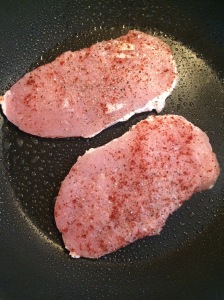 The pork chops cooked within minutes since they were so thin.  I think total time for this recipe was maybe 20 minutes including the chopping / prep time but it tastes like it took double that.  I have to say that this recipe was THE perfect mix of flavors.  I ended up eating both pork chops instead of saving the other for left overs and I have no regrets since it was all healthy! 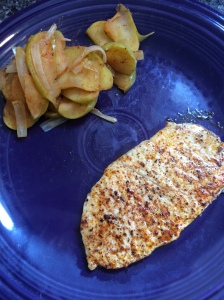